For 90 years, Nini’s Barbershop has been your locally owned barbershop giving our loyal customers, close shaves and high-quality cuts. Whether you are looking for a quick buzz cut or a new modern style, our professionally trained barbers are equipped to give you the exact look you need. Our attention to detail and barber training is second to none. Our third-generation barbershop has proudly been the go-to barbershop for The Ohio State students since 1929. Our locations throughout the years started on campus and have always been convenient to the campus. Visit Nini’s today for a full and relaxing haircut and beard shave.

The History Of Nini’s

We have always taken pride in our connection to the Columbus area. One of Nini’s first customers was the late, great Jimmy Crum. In 1967, during the famous Columbus riots, Ben Nini would provide cool towels and protection for citizens that were hurt or injured during the ordeal. Three generations of Nini’s, originating with Ben, have continued this barbering tradition in Columbus, Ohio for 90 years.

At Nini’s Barbershop, we carry a long-standing tradition that each of our barbers are graduates of barber college. Each has a specific set of skills to handle any type of hair texture, length, facial structure or facial hair pattern. For 90 years, we have performed cuts and styles for every generation. When you visit our barbershop, it is more than just a quick hair cut. We provide a carefully crafted styling along with beard trimmings and shavings that make sure to carefully sooth your skin. If you’re looking for an affordable, relaxing grooming experience, then visit Nini’s today and find out what the professional barber experience can do for you. Walk-ins are welcome!

Pride in Each Service 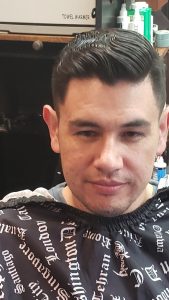